Follow my fishing experiences and unique gifts on my new blog: http://billschiessfishing.blogspot.com

Check out my birding blog at http://madisonbirds.blogspot.com

One pair of Hoodies had staked out the area right by my blinds and it seemed like the best feeding area for the larger Red-breasted.

Here the male Hoody is showing off his crest as he tries to protect the area. 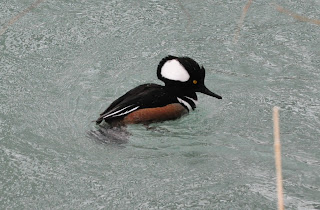 It seemed like his main job was to protect his would-be mate.  Any other bird that got too close was viciously attack. 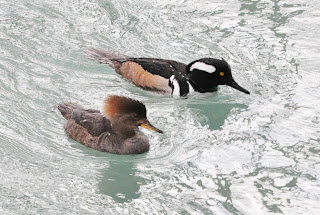 After fishing, a male Red-breasted surfaced right by the female Hoody.  Not a good decision. 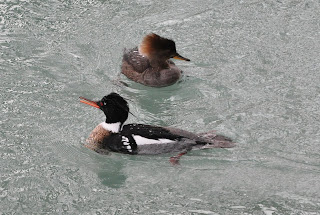 When Mr. Hoody surfaced there was heck to pay.  With his bill wide open, he attack the larger bird. 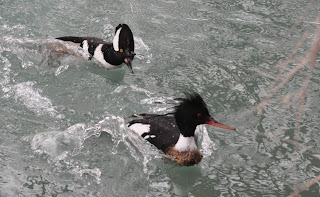 Almost chasing him up on the bank right below my blind. 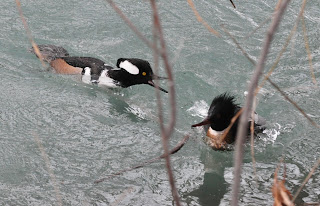 Later when a female Red-breasted got too close, it also was driven off by the angry boyfriend. 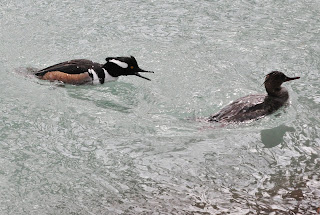 One time he went after both a female and male Red-breasted.  The female dove to get out of his way while the male peeked up for a breath before diving again. 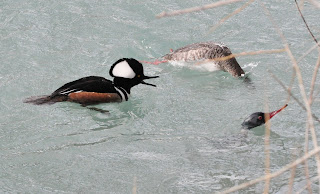 As I was leaving, the master of the fishing hole, proudly displayed hoping the female will soon be ready for his advances.  But once she starts sitting on their eggs, he will be gone, pursuing other chicks or playful activities.  He will not be around to help with the children. 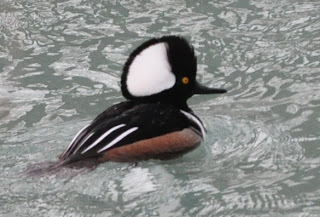 Four hours spent in Heaven in the wilds of Idaho.
Posted by Bill S. at 12:14 PM

Such fun to be able to see the whole story. Great images.

Great merganser shots, and I LOVE the hair-dos!

Excellent action shots, Bill!
The boss bird looks very proud of himself. Too bad he won't stay around to raise the kids.

What a great show!

Great post Bill, its great to see nature at its best and most dramatic. Looks like your great day was equal to mine.

Great Mergs! I have the red breasted off our pier and love photographing thier courtship antics, too. the Hoodies stay up river in protectedd places. most of them are gone for the season now, but I got great pics this winter of them where they could find open water.

Thanks for sharing the story along with the photos! :)

WOW Bill what a great experience to be able to witness all of this spectacular activity. Fun post and the bottom image, is a stunner~

Beautiful photo essay! It is incredible the variety and quantity of wildlife you live close to. Sure appreciate your sharing.

Hiya Bill,
What a kerfuffle!
They gave you quite a show.

Outstanding! I've watched Woodies go after Mallards that way, but never so close to them.